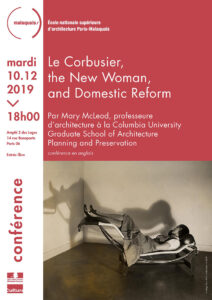 Mary McLeod’s lecture “Le Corbusier, the New Woman, Domestic Reform” will explore the relationship between Le Corbusier’s architecture and the emergence of the New Woman in France after World War I, examining how changing gender identities and social conditions (such as women working and the so-called servant crisis) affected Le Corbusier’s vision of domestic living in the 1920s. She will address the influence of Charlotte Perriand on the atelier’s designs, as well as the impact of an emerging domestic reform movement in Germany and France (especially the writings of Paulette Bernège) on Le Corbusier’s view of modern living. One theme that will be considered is the new importance that the kitchen gained in his work in the late 1920s. The Salon d’Automne apartment of 1929 will be discussed as a pivotal project. As part of her lecture, she will show a short film of 1931, Pierre Chenal’s “L’architecture d’aujourd’hui”, in which Le Corbusier presents three of his villas from the late 1920s.
Mary McLeod is a Professor of Architecture at Columbia GSAPP, where she teaches architecture history and theory, and occasionally studio. She has also taught at Harvard University, University of Kentucky, University of Miami and the Institute for Architecture and Urban Studies. Her research and publications have focused on the history of the modern movement and on contemporary architecture theory, examining issues concerning the connections between architecture and ideology.
For more information on the event, please follow this link.

Assistant or Associate Professor of Architecture

Virginia Tech’s Washington-Alexandria Architecture Center (WAAC) seeks a versatile and committed faculty member who will contribute to its unique educational environment. The successful candidate will have a focus on architecture history and theory grounded in the...

Campus St-Lucas Ghent, Belgium – September 8th 2023 Over the course of the twentieth century, interior design emerged as an autonomous design discipline all over the world. Though strongly depending on local contexts, the discipline’s process toward...