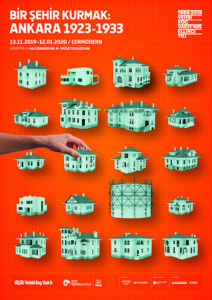 In Turkey, the first quarter of the 20th century not only comprised the fall of an empire but a new republic was born: the search for a modernized identity and the desire for prosperity, along with rapid technological novelties, paved the way for revolutionary developments in conceptions of urban space. A ‘New society’, ‘new man’, ‘new state’, and ‘new administration’ were all longed for, in the midst of the harsh economic crisis of 1929. All these triggered a search for more democracy, which allowed changes in social, intellectual, artistic, scientific work along with urban planning and architectural design.
The Construction of a New City: Ankara 1923-1933 exhibition is based on new, visual and textual information unearthed and brought together with already materialized historic information. The archival work rests on a 17-years research, which has been used in re-modelling the Ankara of 1933, on its 10th anniversary of being proclaimed the Capital of the new Turkish Republic.
The exhibition narrates the Ankara of 1933, with its residents, the newly emerging urban life and unique examples of memorabilia, using archival material, rare postcards and new photo-albums. It further focuses on the New Neighbourhood “Yenişehir” (the New City), an output of the 1925 Plan, with its ‘new’ and ‘early modern’ housing, as well as the new ministry buildings for the new capital city. This urban expansion represented a local but modern taste, with intellectual, technological and financial restrictions, but still comparable with the new global counterparts.
More information can be accessed here.