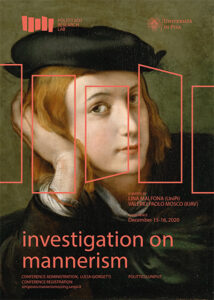 The long wars for European domination, the Sack of Rome, violent epidemics, the dissolution of the unified Church, and the publication of Copernicus’ De revolutionibus orbium caelestium were the primary causes of the profound crisis in Europe throughout the sixteenth century. This uncertain climate saw the development of Mannerism, an artistic and cultural period wedged between the Renaissance and the Baroque. Still, aspects of Mannerism have persisted for so long that architects and historians—like Arnold Hauser, Colin Rowe, Manfredo Tafuri, Robert Venturi and Rudolf Wittkower—wrote about Mannerism as a relevant and constitutive condition of Western culture.
Indeed, our time carries deep similarities to the sixteenth-century crisis. Political, economic, and cultural instability walk alongside a new kind of Copernican revolution: that is, the evolution of information technologies—as powerful as they are ambiguous—that have generated such a vigorous transformation as to alter, duplicate, and overturn our very sense of reality. Jean-François Lyotard had already announced this revolution in 1979, when he launched Postmodernism with La Condition postmoderne. Postmodernism as an artistic tendency shares some undeniable affinities with Mannerism, so much so that today it is difficult to read Mannerism without the postmodernist lens. The similarities between these two movements concern their common propensity for intellectual games, subversions of the canon, variations of scale, caprices, scenic design, and a tendency to carry out a dialogue with history. But episodes of crisis and subsequent re-appropriation of the past occur cyclically, and Mannerism itself can be seen as an underground current that emerges every so often in the art history. Is it therefore appropriate to speak of yet another mannerist condition today? In this light, the proposed investigation is a tool to understand this suprahistorical condition and to launch it in a future perspective.
The full programme of the symposium is available at the symposium webpage and can be downloaded here. The list of speakers includes Sylvia Lavin, Andrew Leach, Paolo Portoghesi and Alejandro Zaera Polo.
To participate in the symposium, please send an email to simposio.manierismo@ing.unipi.it by 12 December 2020.
The symposium is curated by Lina Malfona (UniPi) and Valerio Paolo Mosco (IUAV).

Assistant or Associate Professor of Architecture

Virginia Tech’s Washington-Alexandria Architecture Center (WAAC) seeks a versatile and committed faculty member who will contribute to its unique educational environment. The successful candidate will have a focus on architecture history and theory grounded in the...

Campus St-Lucas Ghent, Belgium – September 8th 2023 Over the course of the twentieth century, interior design emerged as an autonomous design discipline all over the world. Though strongly depending on local contexts, the discipline’s process toward...