EVENT: Lecture: ROUNDTRIP II: From the Alps to the Andes. Le Corbusier and the members of the Latin America Modern Movement. Online, 11 June 2021

Lecture: ROUNDTRIP II: From the Alps to the Andes. Le Corbusier and the members of the Latin America Modern Movement. Online, 11 June 2021 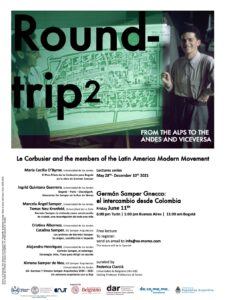 The second lecture of the series, titled Germán Samper Gnecco: el intercambio desde Colombia, will take place in Spanish at 18:00 CEST on Friday, 11 June. To register, send an email to info@ex-momo.com. More information about the lecture can be found here. The full series program can be found here.

Seven sessions on a monthly basis, presented by international researchers reflecting on some of the protagonists of the Latin American Modern Movement who have developed urban projects for the continent, contributing to the debate on the contemporary urban landscape. After the first lecture series (October-December 2020), “Roundtrip: From the Seine to the Rio de La Plata” (see more on YouTube Channel ex-momo) on the relationship between Le Corbusier and Argentina starting from the journey of 1929, in this second cycle will deepen the role of the protagonists of the Latin American Modern Movement through the architects – from Berta Zegarra Russo to German Semper, from Luz Amorocho to Lucio Costa – who developed an educational and professional relationship between the two continents.

The aim of these meetings is to reflect on urban projects, whether completed or not, the result of the exchanges of shared modernity between Europe and Latin America. Among the topics: the role of correspondence exchanges / the contribution of women architects / the realization of the urban proposals of the Modern Movement / preservation and enhancement of the heritage resulting from these exchanges.

The Lessons of Rome (6th edition)

March 24, 2023 - Lyon Museum of Fine Arts The Lessons of Rome aim to propose a space for reflection for anyone who grasps Italy as an architectural, urban, and landscape research laboratory. Defining Italy as a laboratory involves analyzing contexts of urban policies...

The call for articles for the issue number 13th of the journal Cuadernos de Proyectos Arquitectonicos is open. The call takes place in two phases. The first phase ends on 27 February 2023, and peer review will begin immediately. In addition, a second call may be...

Architectural Borders and Territories (AB&T) offers a comprehensive series of books on architectural ‘borders’ and ‘territories’, emphasizing the intrinsic critical relationship, as well as the inherent complexities, between these two core terms of architecture....

The SAH 76th Annual International Conference will be comprised of an in-person meeting in Montréal, Canada, April 12–16, 2023, followed by virtual sessions, September 20–22, 2023. The expanded conference...