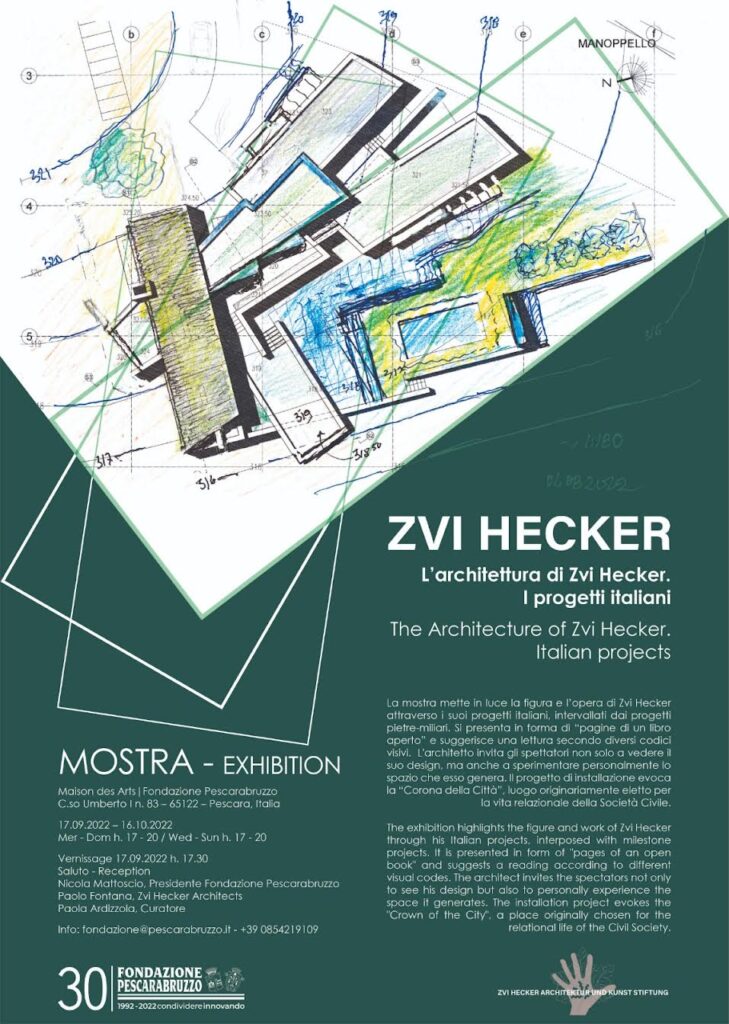 An important opportunity to see all of Zvi Hecker’s Italian projects in Pescara, Italy, on display at the Maison des Arts by Fondazione Pescarabruzzo. The architecture of Zvi Hecker. The Italian Projects is an exhibition that retraces, in a time span from 1999 to
2022, the design genesis of the various Italian projects through sketches, drawings, and models.

On display are also the iconic projects built from the 1960s onwards in Europe and Israel which, as a subtle fil rouge, guide the visitor through the pages of an “open book”. Indeed, the Polish-Jewish architect designed a site-specific for the Maison in the form of “Pages of an open book” so that the exhibition space is itself an example of Hecker’s architectural language.

Viewers are invited not only to see the architect’s design path but also to personally experience the shape and space it generates. The project “a casa di Ella” that is being built in Manoppello, in the province of Pescara, is also part of the exhibition. The project narrates the important comparison between the international milieu that Hecker brings with him and the ancient Abruzzo culture which nature, characterized by an often harsh and fascinating territory, he has been able to interpret as an element full of prodromal symbols and values.

Works will be on display from 17 September to 16 October 2022. from Wednesday to Sunday, h. 5 – 8 pm. Vernissage 17 September at 5.30 pm while the catalogue will be presented on the occasion of the Finissage, which will be held on 15 October at 5 pm. The exhibition, promoted and realised by Fondazione Pescarabruzzo and with the support of the Zvi Hecker Stiftung Berlin, has Paola Ardizzola as curator.

more news from the field
← Book Conversation: Exactitude: On Precision and Play in Contemporary Architecture Humanities Bulletin (HB), Vol. 5, No. 2 →