Building for the Nation Abroad 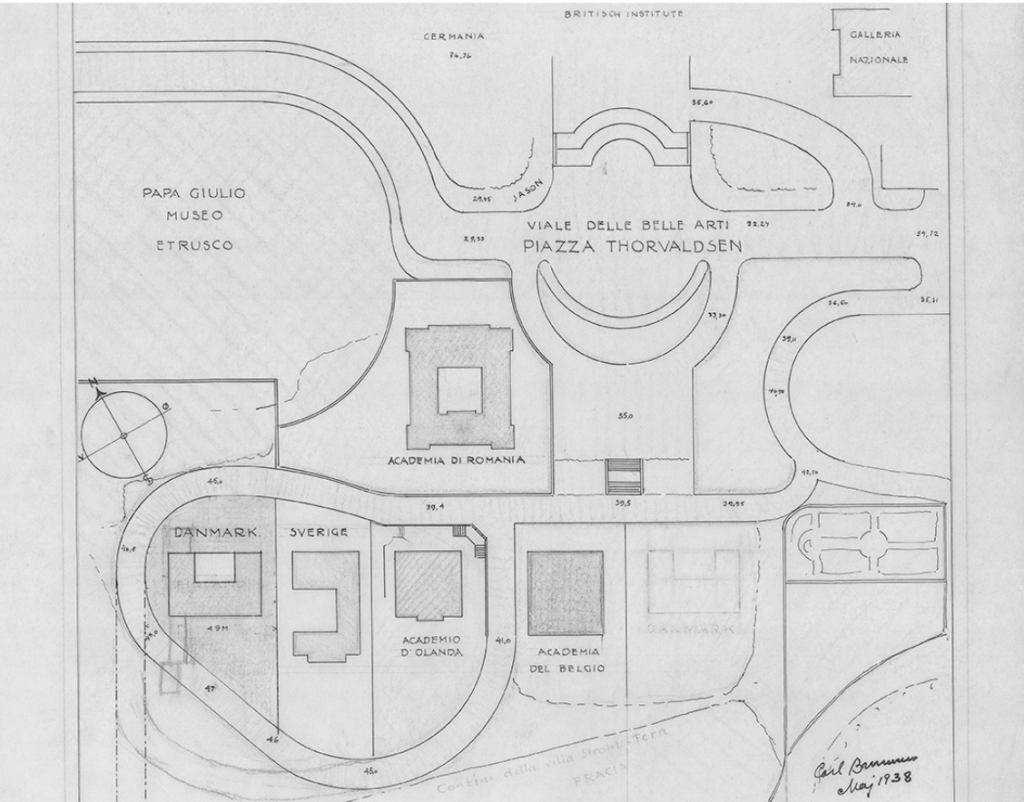 Academia Belgica and the Danish Academy in Rome

Throughout history nation states and many national institutions have built on foreign soil. They did so on several occasions and for several reasons: to ensure political representation, to facilitate cultural exchange, to foster economic relations, to shape a national identity or to cement diplomatic ties. Embassies, legations, consulates, national, cultural and scientific institutions such as the academies in Rome are just some of the examples that fit this description. The process of building such projects is impacted by a multitude of actors across the sending and receiving states and is often challenging. It involves navigating different and less familiar bureaucracies, local building regulations and administrative procedures and a conscious assessment of whether or not to ‘export’ architectural expertise, constructional knowledge or building materials. In the decision-making process, different and sometimes conflicting interests are at play, resulting in buildings that more often than not can be described as hybrid constructs – somewhere in between a national export product and a locally embedded spatial entity. In many cases the final product can be described as a negotiation of the ambitions of the organisational committee of the sending state, and the political, economic, cultural and technical reality of the host country. Although the impact of local actors and mechanisms on these national building projects abroad is immense, they have for too long been neglected.

This colloquium aims to discuss the challenges of building for the nation abroad with a particular focus on the process of negotiation between the many actors involved. The organizers welcome papers that interpret and analyse long-term building structures and interventions from the 19th century until the present, addressing a wide range of scales, going from the urban to the interior. The organizers  seek scholarly contributions with a global perspective able to propel new insights in these architectural productions, especially those deconstructing the sometimes heroic depictions of the nations involved and untangling the underlying signifiers of race, gender, labour and power.

Proposals might reflect on one or more of the following themes:
– urban interventions in the host country meant to accommodate building projects from foreign nations (e.g. the creation of extra-territorial ‘islands’);
– the design and materiality of particular national building projects in relation to the mission of the institute they were meant to house and vis-à-vis the host country (e.g. the use of national styles, building techniques or materials as a form of cultural diplomacy);
– the processes of negotiation that underly these building projects, involving a broad range of specialists including bureaucrats, diplomats, architects, interior designers, artists, engineers, landscape architects, politicians, managers, funders and banking institutions;
– the tools of negotiation employed in the context of these building projects, in particular the employment of the inscriptive disciplinary tools and codes of the architects (models, drawings,…) in relation to or challenged by the daily communication and operations at building sites by workers, constructors, contractors…;
– the knowledge exchange that occurs in these foreign-local collaborations (e.g. in terms of design, building techniques and resources or bureaucratic means).

Proposals for paper presentations should consist of a title, an abstract of 400 words, and a 10-line biographical statement. Please send you proposals to info@academiabelgica.it Submission deadline: 1 March 2023. The conference will be held in English. Speakers whose proposals are accepted have to provide their own travel and accommodation expenses.