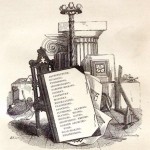 This group aims at opening up word-image studies to the field of architectural history, in which it has so far only rarely been considered. This relatively new multidisciplinary area seeks to question old dichotomies between the verbal and the visual. Arguing that neither text nor image can ever be a pure medium independent of the other, we invite scholars currently exploring relationships between building, text and image to join us in exploring the following questions: how do word and image collaborate with, contrast to, or depend on, each other in architectural representation? Can we detect shifts in how they have done so in the past, and what would be the result of these on the cultural role of the built environment? Finally, what are appropriate methods to investigate such mixed medialities in relation to the built?

Enquiring about the common grounds, or the points of divergence, between word and image in the dissemination of architecture, the group will promote debate on the role that words and images – through collaboration, contrast or independence – play, and have played, in the physical and mental construction of the modern city and its spaces. Methodologically, it will do this, first, through an international exchange of contents and sources and, second, by debating specific approaches to the simultaneous investigation of word, image and building. Its originality lies in bringing the theoretical framework of word-image studies, often developed within the disciplines of poetics or visual cultures, to that of architectural history. We invite researchers working on any period and any geographical region to join us in the search for new methodologies for word-image studies within architectural history.

Please email the EAHN Office to be put in touch with group coordinators.

back to group overview