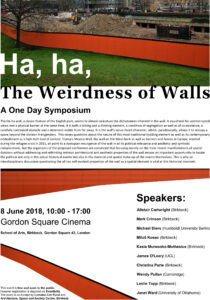 The Ha-ha wall, a classic feature of the English park, seems to almost caricature the dichotomies inherent in the wall. A visual tool for uninterrupted views and a physical barrier at the same time, it is both a linking and a dividing element, a condition of segregation as well as of co-existence, a carefully concealed obstacle and a deterrent visible from far away. It is the wall’s Janus-faced character, which, paradoxically, allows it to occupy a space beyond the division it engenders. This raises questions about the nature of this most traditional building element as well as its contemporary embodiment as a high-tech tool of control. Trump’s Mexico Wall, the wall on the West Bank as well as barriers and fences in Europe, erected during the refugee crisis in 2015, all point to a dystopian resurgence of the wall in all its political relevance and aesthetic and symbolic complications. But the organizers of the proposed conference are convinced that focusing merely on the most recent manifestations of spatial divisions without addressing and rethinking intrinsic architectural and aesthetic properties of the wall misses an important opportunity to locate the political not only in the actual historical events but also in the material and spatial make-up of the events themselves. This is why an interdisciplinary discussion questioning the all too self-evident properties of the wall as a spatial element is vital at this historical moment.
The poster of the event can be downloaded here.
Speakers:

This event is free and open to the public, however registration is required via Eventbrite. The event is co-funded by Lorraine Lim Fund and Architecture, Space and Society Centre, Birkbeck