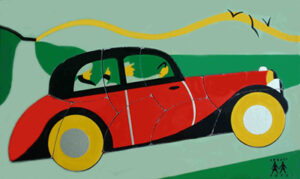 As the Bauhaus Centenary year comes to its close, what is left to say? The Bye Bye Bauhaus day symposium, offers new perspectives and stories that have not yet been told, concerning design in Germany and Britain during the past century.
The programme opens with Richard Hollis on the Belgian Art Nouveau designer Henry van de Velde, the subject of his new book and Professor Gerald Adler, the English expert on Heinrich Tessenow. They are followed by Dr David Haney, author of When Modern was Green, 2010, who considers the afterlife of the Trade Union School at Bernau by the second Bauhaus director, Hannes Meyer, and Professor Frederic Schwartz of UCL who asks ‘What was the Bauhaus?’ – a question that becomes more difficult to answer the more we hear about it.
The afternoon programme includes Valeria Carullo, Curator, The Robert Elwall Photographs Collection, RIBA British Architectural Library, speaking on the RIBA Refugee Committee, before moving onto textiles, with Tanya Harrod on the Bauhaus enthusiasms of the English handweaver, Ethel Mairet. Sophie Jump, theatre designer and scenographer, speaks on the little-known collaboration between Marcel Breuer and the costume design group, Motley, in 1930s London, followed by Dr Anna Nyburg, on ‘Exiles and Textiles’, the little-known story of official British support for manufacturers fleeing Nazi Germany.
The final session introduces five lesser-known Bauhäusler in Britain: Jilly Allenby on her grandfather, the sculptor Johannes Ilmari Auerbach; Marcus Williamson on René Halkett, painter, designer broadcaster and lyricist for the punk band Bauhaus; John Allan on the graphic designer George Adams (Teltscher), Rachel Dickson on puppeteer Werner ‘Jacky’ Jackson and Danyel Gilgan on his grandfather, the maker and teacher Wilfred Franks.
For booking your place, please follow this link.  Twentieth Century Society Members: £40; Non-members: £50; Students with valid ID: £25
Tickets include refreshments with sandwich lunch and post-conference drinks.
The flyer of the event is available here.

The Lessons of Rome (6th edition)

March 24, 2023 - Lyon Museum of Fine Arts The Lessons of Rome aim to propose a space for reflection for anyone who grasps Italy as an architectural, urban, and landscape research laboratory. Defining Italy as a laboratory involves analyzing contexts of urban policies...

The call for articles for the issue number 13th of the journal Cuadernos de Proyectos Arquitectonicos is open. The call takes place in two phases. The first phase ends on 27 February 2023, and peer review will begin immediately. In addition, a second call may be...

Architectural Borders and Territories (AB&T) offers a comprehensive series of books on architectural ‘borders’ and ‘territories’, emphasizing the intrinsic critical relationship, as well as the inherent complexities, between these two core terms of architecture....

The SAH 76th Annual International Conference will be comprised of an in-person meeting in Montréal, Canada, April 12–16, 2023, followed by virtual sessions, September 20–22, 2023. The expanded conference...