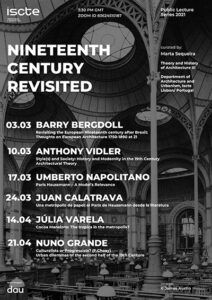 Nineteenth century is often understood from the History of Architecture point of view as a kind of “Catapult” for the twentieth century, or, in another sense, as a gap between Enlightenment and Modernity. However, in this century of fast changes and in a continent that was the scene of a true industrial, political, cultural and social revolution, some of the most relevant architectural and urbanistic experiences were made, led by those who then sought to respond to the new society challenges. Railway stations, operas, museums and prisons are just some of the new programs that had to be satisfied, while trying to create a new city-model.
Nineteenth Century Revisited consists of a set of six conferences that try to cover the complexity of this period, bringing together as prominent researchers as Barry Bergdoll, Anthony Vidler, Umberto Napolitano, Juan Calatrava, Júlia Varelaand Nuno Grande. Focusing the discussion on six main subjects – ranging from Haussmann’s Paris to Cerdá’s Barcelona; from the homes of overseas cocoa producers to the cities of nineteenth century literature -, models are analysed not only from the historical point of view, but also from a contemporary insight, by assessing its possible relevance and validity. Marta Sequeira – who will introduce each session and moderate the final public debate – is the curator of this cycle, organized within the scope of the Master in Architecture of Iscte Instituto Universitário de Lisboa in Portugal.
Nineteenth Century Revisited is open to the public and assistance will be provided through the Zoom platform (https://videoconf-colibri.zoom.us/j/83624515187).
The lecture series program can be downloaded here.

more news from the field
← CfP: Call for Entries: Drawing Matter Writing Prize Deadline Extended: Fabrications: The Journal of the Society of Architectural Historians, Australian and New Zealand. The Architecture of the State and Statelessness →