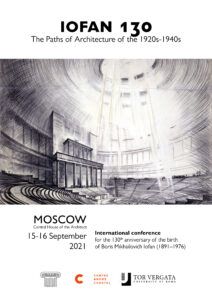 The 130th anniversary of Russian and Soviet architect Boris Iofan (1891–1976) provides an opportunity to reflect further on the architectural heritage of the interwar period. Iofan’s most famous work, the Palace of Soviets in Moscow, a project that won the international competition in 1932, marked a turning point in the history of 20th century architecture while also provoking contradictory opinions. The eclectic project, which mixed classical monumentality with a utopian image of the city, reflected the multifaceted profile of its author. The biography of the architect, who had studied and worked in Odessa, St. Petersburg, Rome, and Moscow, distinguished him from his contemporaries. In fact, without joining any of the established architectural associations and trends, he succeeded in developing projects that soon prompted a fervid debate on architecture.

Iofan impersonalises many questions and dilemmas of the history of 20th century architecture: his interaction with proponents both of the classical paradigm and the avant-garde; the phenomena of ‘totalitarian art and ‘difficult heritage’; the peculiarities related to architectural education and the reform of the same, and the role of architecture in international relations on the eve of the Cold War. The radical change in stylistic orientation from the avant-garde to the ‘critical assimilation of heritage’ in Soviet art and architecture, its reasons and background as well as Iofan’s own role in this change – all these problems are being reinterpreted today. The change in views on the artistic heritage of the interwar period in the USSR and in the West and on the elaboration of norms and approaches to restoration, suggest new ways of considering the art and architecture of the 1920s and the 1940s.

Contributions may focus on the following themes:

To submit a paper, please send an abstract of no more than 300 words in English, French, Italian, or Russian, along with a short CV by 15 June, 2021, to the e-mail address iofan130@gmail.com. The call for papers can be found here in English, Italian, and Russian.

The conference will be held in Moscow, with attendance both in person and virtually, pending future sanitary measures. Collateral events in Rome are planned. The proceedings will be published after the conference.

more news from the field
← EVENT: Lecture: ROUNDTRIP II: From the Alps to the Andes. Le Corbusier and the members of the Latin America Modern Movement. Online, 28 May 2021 EVENT: Recognition: CAA/American Institute for Distinction in Scholarship and Conservation. Online, 25 May 2021 →